Parenting in the Holiday Season

As we approach the holidays, tensions can run high amongst family members; that may be especially true for divorced or separated parents.  As parents we want the holiday season to be filled with joy for our children as well as for ourselves.  We reflect back on our holidays during our own childhood and strive to replicate the joy or replace what may be our own difficult memories with beautiful memories for our own children.  For parents that are newly divorced or separated this time of year may be even more stressful as the pain of loss of the once intact family feels ever present.  One of the best gifts that divorced parents can give their children is a peaceful holiday season.  As difficult as it may be for you, the parent, it is more difficult for your children.  They feel the painful loss as well, and want nothing more than to be able to spend time with both parents as well as extended family and friends.  Those events and activities that make up our holiday traditions are important to them as well.  So, while it may be difficult it is likely best if you are able to negotiate the holiday schedule well in advance of the holiday itself.  Respect both families and extended families and their traditions, and above all, remember that your children are a piece of both parents and an appreciation and respect for all family members will show your children how to negotiate and resolve conflict in the most positive way.

A Lesson from Dickens for Co-Parents this Holiday Season

Divorce and separation can be a difficult process for spouses to endure, particularly given that it uniquely requires true bravery, but also restraint.  In cases where a spouse suspects infidelity, addiction or other dishonesties, it is not uncommon they feel they want or need to get proof of their spouse’s wrongdoing.  All potential clients should heed this warning: the truth may not outweigh the risks, especially when those risks include possible state and federal criminal charges.

When considering recording telephone calls, attaching a GPS monitoring device to a vehicle, or perusing another’s email inbox, it should be stressed that even if a spouse is able to “catch” the other person in their wrongdoing, the evidence of that wrong doing may not be admissible in court if it was obtained illegally.  In general, in order to record telephone or in-person conversations, there must be consent.  Under federal wiretapping laws, at least one party to the conversation must consent.  This one party can include you, the person recording.  But, this State has gone one step further, and require “two-party consent” under our wiretapping laws.  This means that all parties must consent to the recording of the conversation.  There are some intricate caveats and nuances, but generally speaking, to discretely record a telephone conversation of other parties without their knowledge and consent will likely not be admissible in court to prove the very thing you are attempting to prove.  Furthermore, by violating these privacy and wiretapping laws you could face criminal prosecution and expose you to a civil lawsuit for damages.

Lastly, even if a spouse is successful on proving adultery, the family courts in New Hampshire are unlikely to deviate so far from an equal split in assets/debts that would make the trouble of potential criminal prosecution, worthwhile in the long run.  Reference the wiretapping and privacy laws applicable to you, for more specific information on the topic.

Attorney Cathy Shanelaris participated in teaching an educational class for the New Hampshire Bar Association’s Lawyer Referral Service to explain the court process and procedures for obtaining a child support order from the court.  Please click on the link to see the video:

Alimony it is one of the most difficult issues that we grapple with in a divorce.  If a case is appropriate for alimony (meaning one spouse has a need for financial support to get to a point of self-sufficiency and the other spouse has the ability to meet that need) the most difficult questions for spouses, lawyers and judges is how much alimony should be paid, and for how long.  Unlike child support, there is no formula to determine what is appropriate, rather it is a judgment made based on the specific facts of the individual case.

Alimony can also be modified; in New Hampshire in order to modify an alimony award an individual must prove that there has been a substantial and unforeseeable change of circumstances that makes the current alimony award either improper or unfair.  That is a standard that has been described as difficult, and a high burden to meet.  The New Hampshire Supreme Court has recently clarified that this standard for modification does not apply to cases where an extension or renewal of alimony is being requested.  Rather, if an individual is asking the court to extend the length of time an alimony award will last, the standard is lower and is described by the Court as “to establish that justice requires a renewal or extension”  See, In the matter of John Lyon and Kimberly Lyon, 2013-401, slip op. (May, 2014).  https://www.courts.state.nh.us/supreme/opinions/2014/2014039lyon.pdf 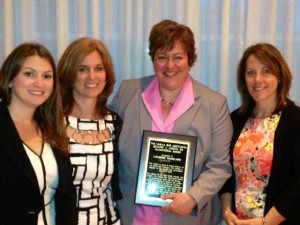 Our very own Cathy Shanelaris is 2014’s recipient of the Ted Jordan Award!  This award is given in memory of Ted Jordan, a member of the Nashua Bar Association from 1967 to 2002.  Ted is remembered for his adventurous spirit and lifelong concern for helping to improve the local bar association and community, and the award is presented annually to an individual who embodies Ted’s same ideals.  This award is particularly special because Cathy was selected by her fellow Nashua Bar Association members in recognition of her efforts and contributions to the practice of law, and to the community she serves.   We congratulate Cathy on this well-deserved honor!

Posted by Attorney Cathy Shanelaris on June 25th, 2014 in Child Support, Family Law | Comments Off on Tax Dependents and the Affordable Care Act

The ACA may create the possibility for problems among parents where cooperation and communication is difficult if the dependency exemption switches between parents from year to year or the non-insuring parent always claims the children as an exemption.  The parent with the dependency exemption may find it difficult to provide proof of insurance to the IRS because the other parent carries the health insurance and refuses to provide that proof.  In high-conflict relationships between separated or divorced parents the issues of medical insurance coverage and tax penalties could drive them back to court.

The law does provide a mechanism for individuals to file for an exemption from having to provide insurance for various reasons such as religious reasons, incarceration of the parent who was providing health coverage, if coverage is deemed “unaffordable” or for some other hardship under the law.    Parents who are currently in the divorce process may need to have an order or agreement that the person who covers health insurance be ordered to provide proof of insurance or reimburse the custodial parent for penalties incurred from the IRS for failure to provide proof of insurance.  Parents should seek advice from their tax preparer, accountant or CPA when preparing their taxes.

Posted by Attorney Jane Schirch on May 2nd, 2014 in Child Support | 0 comments

Posted by Attorney Laura Maistrosky on May 2nd, 2014 in Criminal Law | 0 comments

If you are being charged with a criminal offense, you usually don’t have notice of that until an officer or Sherriff is knocking on your front door.  But, in some circumstances, if the police department is still in the preliminary stages of their investigation and have yet to decide whether or not they are going to charge you with an offense, you may find yourself in a unique position.  The earlier you cooperate with the investigating police department, depending on the charged offense(s), it may be more likely that you will be able to reach a favorable settlement.  If a police officer contacts you in an effort to collect information related to an incident, contact an attorney right away.  Your attorney may be able to find out ahead of time if complaints against you will issue, therefore, may have the opportunity to accompany you to the police department to turn yourself in.  This will not only spare you the stress of being arrested in front of your family or coworkers, but also, will demonstrate to the prosecuting officials that you are willing to cooperate in an effort to resolve the issues at hand.